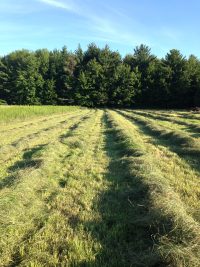 I became acquainted with Robert during my search for an affordable alternative to ag lime. Soil tests the previous year revealed that most of the ground our hay fields grew on had turned sour. Their PH levels were under 7. Calcium is what you apply to the ground to correct the PH. It was the cause of our dwindling harvests. If you are a wise farmer you understand the sacredness of soil and do all you can to preserve and protect it.

Robert worked for a company that sold liquid calcium. Liquid calcium had many advantages over dry lime but I had never used it before. I had questions. Lots of them. I needed to educate myself on the product. After receiving Robert’s initial response to an email, I could tell he was a salesman through and through. The email was pages of information and customer testimonial’s singing the praises of his product. As I sifted through the information I had to wonder, was it all smoke and mirrors? Or was his perceived confidence trusted truth?

Then the phone call happened. His sentences strung together like a fine pearl necklace. I could tell the sales pitch was recited hundreds, if not thousands of times, locked in his memory from the repetition. He drew out the vowels of his words in typical southern drawl fashion. By its tone and fluctuations, I guessed he was close to retirement. Here and there his words slurred together into unintelligible sentences. Even so, it was a pleasant voice to listen to. That was fortunate because Robert did most of the talking. True to his old school sales techniques, he peppered the conversation with sweetheart bombs and young lady references. I didn’t mind. They lightened the scientific nature of the conversation and ever so gently tickled my heart. Occasionally, to make sure I was still a captive audience there would be a quick, “You follow me dear?” He had me smiling at the first sweetheart.

Questions came about long I’d been farming and the animals we kept, the joys and tribulations that come with bringing in hay. We lamented briefly about getting older. More questions came. How long had I had the horses and their names? Did I ride often? They began to reflected a genuine concern for the land and the people that tended to it. I didn’t feel any pressure. I wasn’t wasting any of Robert’s time. Whether he got the sale or not.

It was near the end of the conversation that I learned Robert was 73 years old with no plans to retire. At the conclusion of the call I was reading off my credit card number. My encounter with Robert brought to mind a quote by Theodore Roosevelt, “People don’t care how much you know until they know how much you care”.

As it turned out, Robert was just the person I needed to educate me.

One thought on “The Salesman”

© Angeline Haen and Sweet Wisdoms, 2017-2021. Unauthorized use and/or duplication of this material without express and written permission from this site’s author and/or owner is strictly prohibited. Excerpts and links may be used, provided that full and clear credit is given to Angeline Haen and Sweet Wisdoms with appropriate and specific direction to the original content.