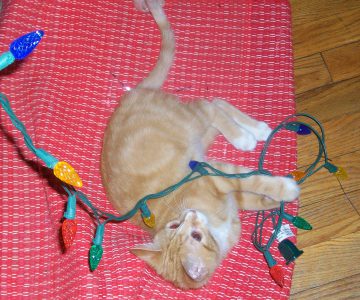 The celebration of Saint Nickolas Day can spin a household and a school bus into a tizzy. The event begins with having to find a place to hang stockings. For those of us without a mantel, it can take repeated reassurances to our little ones that St. Nick can find stockings wherever they are hung.

Then you have to get the much-anticipated night of his arrival correct or face self-inflicted parental guilt until Christmas arrives. Is it the night of the 5th or the night of the 6th? Which is it? A quick call to Grandma and she recites the catchy rhyme I can no longer remember and, after a quick check on Google, the day of Saint Nicholas’s arrival is confirmed. Heaven help us if St. Nick should come a day early, a day late or forget us all together. All three scenarios play out in full production on the rolling stage of my school bus in early December.

Children whose houses were visited by the stocking-stuffing Saint console friends whose houses were mysteriously missed. When that happens grey vinyl bus seats convert into therapy couches as little minds wrestle with impossible reasons for their misfortune. It’s heart wrenching. The crushing blow comes to the empty stocking children when defiant peers conclude that St. Nick isn’t coming to their house at all…ever! Quiet sobs and snuffling filter through the bus’s chatter. Emotions go amuck.

Eager to show and share what was stuffed into those stockings, therapy sessions end as quickly as they started. Backpacks fly open. Crying subsides. Dollar store trinkets rouse excitement and a clamor of “Let me see! Let me see”! echoes inside the bus. The happy distraction lightens the

mood. That is until the last of the cheap Dollar Store trinkets falls and breaks. Crying resumes. But there’s still the candy, I say to myself. Maybe it will last until we get to school….

By the end of the week, most of Saint Nicholas’s gifts have been broken or eaten. The bus settles back into its “As the Wheels Turn” elementary school age daily drama. Or so I believe.

Giggles burst above the seat behind me, the infectious kind of laughter that raises curiosity and lowers good intentions. A young voice says, “Now put a mustache on me”! I glance up and ask, “You two aren’t drawing mustaches on each other, are you”? Without hesitation the response comes.

“Nope. We’re playing with our St. Nick stuff”. Hmm. Traffic pulls my attention back to the road. The mustache mystery is on hold for now. As I am about to revisit the mustache mystery, a face pops out from the side of the seat and into the aisle. That little face is trying to catch a glimpse of its reflection in my rear-view mirror. Looking up at me is a face covered in what appears to be stamped blue paw prints. Several layers of the stamp cover the child’s upper lip. An audible gasp escapes me. My lower jaw drops. My mouth gapes open. OMG! “I thought you told me you weren’t drawing mustaches on each other”! Response: “We weren’t drawing them. We were stamping them on.” St. Nick, you are giving me quite the holy headache. You’re really “stocking it to me” this year!

My lesson in all of this? If your life isn’t giving you the answer you want, maybe you’re asking the question wrong.

© Angeline Haen and Sweet Wisdoms, 2017-2020. Unauthorized use and/or duplication of this material without express and written permission from this site’s author and/or owner is strictly prohibited. Excerpts and links may be used, provided that full and clear credit is given to Angeline Haen and Sweet Wisdoms with appropriate and specific direction to the original content.