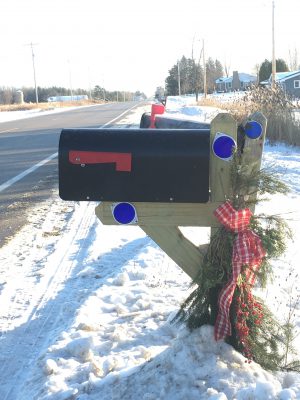 The other day I received a bulky package in the mail. As usual our mailman, Craig, placed it inside our entrance way instead of laying it outside against the door. I could see the struggle in my mind…him trying to hold the door open with the awkward and heavy package obstructing the way through for both of them, and the room that thing must have taken up in his car!

It was in that moment I “saw” my appreciation for my mailman. To express my gratitude I left a good helping of my homemade caramels with a Christmas card in the mailbox. I warned him not to eat them froze for fear of an emergency visit to the dentist. In return we received a very nice thank you and…he didn’t wait.

There is a nasty bug going around. I’ve had several “clean-ups” on my bus and don’t want to think about how many “clean-ups” the school janitors have had to deal with in recent weeks…at least there’s doesn’t freeze to the windows. If your child has gotten sick in school or the bus maybe the shine of appreciation would brighten a janitors/bus drivers’ day. I can think of so many others. There are those that you may believe don’t deserve any appreciation…well…they are the ones that need it the most.

Yes, they know it’s their job, but if nobody did their job, what would we do? We all need each other, it’s that simple. The media would have us believe we all hate each other. We don’t. Appreciation is like polishing people. You shine, they shine…and the whole world gets a little lighter and brighter. Make it from the heart not obligatory then you get the warm fuzzy feeling too from basking in their glow.

© Angeline Haen and Sweet Wisdoms, 2017-2022. Unauthorized use and/or duplication of this material without express and written permission from this site’s author and/or owner is strictly prohibited. Excerpts and links may be used, provided that full and clear credit is given to Angeline Haen and Sweet Wisdoms with appropriate and specific direction to the original content.