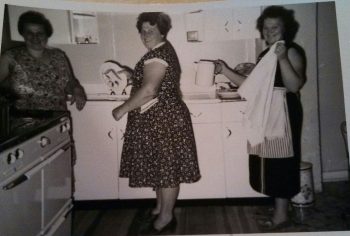 Ever holiday I find myself seated at the kitchen table with a cup of coffee, sifting through a drawer of recipes. The search is as much for family recipes as it is for memories. It doesn’t take long before I find them both.

Before my Mom and Aunties passed they gifted me a few of their kitchen secrets and well-used kitchen items. There’s Busha’s (Grandma’s) hand-forged, three pronged fork. The stubby handle fits perfectly in the palm of a hand when cutting in shortening. Busha cooked on a woodstove. Any meal was a laborious monumental task. I don’t think the stove was ever cold to the touch.

I treasure Mom’s solid wood rolling pin and flour sack towels. Mom always rolled out her dough on a well floured flour sack. Thin from two generations of washings, I handle them with extreme care and use them exclusively for rolling out dough. To find one of Mom’s recipes with actual conventional measurement is not the norm. Her measurements were by feel or taste. It’s probably why Mom would call me up to come over and “watch” her make something. She would often tell me, “I’m not going to live forever. If you want to learn how to make this keep watching.” I’m glad I did so her love can nourish the next generation.

There’s Auntie Anna’s substantially cracked and chipped blue speckled enamelware pan. It must have been a favorite based on its condition. I’m so happy she held on to it and passed it on to me. Believe it or not nothing ever sticks to that pan! Auntie Anna’s cooking instructions were loud, clear and concise. Her stern direction carried over from her many years running the kitchen for the local church’s annual picnic.

Then there’s Auntie Rosie’s titanic sized cast iron frying pan. In her later years, arthritis prevented her from lifting the heavy weight. The pan than became a permanent fixture on her stove-top. Cleanup was a wipe or two with a paper towel. Still is.

I can’t forget Auntie Vickey’s delectable dessert recipes. The handwritten recipes have yellowed with age. Torn edges of the fragile paper taped together several times. The tape too has yellowed. A busy farmer’s wife, Auntie Vickey’s countertops and kitchen table held much of the overflow from her cupboards. She could make a meal fit for king in minutes!

If you haven’t guessed, I am descended from a long line of amazing Polish women that knew their way around a kitchen. Ever since I’ve been old enough to hold a  wooden spoon in my hand, they pressed me into service at some task that was age appropriate. Any gathering of the family cooks ended with a meal. Crumbs on the table were never casually wiped to the floor. Licked fingers firmly pressed the bits against the tabletop. The finger with moist crumbs attached was promptly licked clean. Ever last crumb of life’s deliciousness was savored.

The strong Polish women in my life grew up in a generation that didn’t say, “I love you,” out loud very often, if ever. Words of love may have not been shared but what they did share was the recipe’s to taste it. What else could be created in the heart of the home—the kitchen—but love?

2 thoughts on “Recipes for Love”

© Angeline Haen and Sweet Wisdoms, 2017-2020. Unauthorized use and/or duplication of this material without express and written permission from this site’s author and/or owner is strictly prohibited. Excerpts and links may be used, provided that full and clear credit is given to Angeline Haen and Sweet Wisdoms with appropriate and specific direction to the original content.