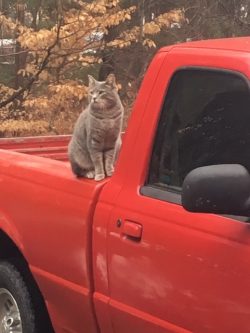 She’s not much to look at on the outside; bare bones on the inside; stick shift on the floor; no cruise control; no heated seats; no automatic nothing. On her tail gate are two bumper stickers. I’M A VIETNAM VETERAN and NO FARMERS. NO FOOD. What she lacks in appearance appeal is made up in the heart that pounds under her hood.

“She” is a red 1995 Ford Ranger, Reggie White Signature Edition, complete with floor mats bearing the Green Bay Packer “G” emblem. Reggie White played defensive end for the Green Bay Packers football team in the early 90’s. He helped the team win Super Bowl XXI with a game-ending sack. Green Bay, Wisconsin raised his standing in the community to sainthood after that.

I’m borrowing her from my brother Eddie while my daughter is home from college during winter break. She was fortunate to have the opportunity to earn money during her time off but we unfortunately are short on vehicles. Thanks to my brother’s generosity purchasing another vehicle can now be put off until spring.

On the first morning behind the wheel, I spilled most of the coffee in my mug trying to find the cup holder. Its awkward position almost completely under the dash and behind the stick shift on the floor created the dilemma. No worries. When I tried to wipe it up I couldn’t tell where the coffee spilled. I found it’s quite difficult to drink coffee driving a manual transmission anyhow. Every time I reach for a sip it seems I have to shift.

Adjectives to describe the complex interior aromas cover a wide range of essences. The prominent odor emanates from the three-inch long, one-inch round cigar stub balanced on the edge of the ashtray. I don’t think they put those in vehicles anymore. Do they? I love the scents that swirl around inside an old pickup. The Little Tree air freshener dangling from the rear-view mirror is long past its freshening stage. I was a little sad. I wondered what Black Ice X-tra Strength smelled like. My brain is constantly deciphering the potpourri of airborne wonders wafting past my nose. One deep breath in and all those cherished childhood memories bumping around with my Dad in his pickup truck were revived.

A two-inch round chip in the windshield with an uncanny likeness to a bullet hole, lines up squarely between my eyes. Highway speeds give me a palpable feeling of vulnerability as my body slowly slouches down into the well-worn hollow of the seat on the driver’s side. Seventy mph seems like I’m exceeding her engine boundaries so I keep her five miles under the speed limit. Traffic passes me; make that everyone in the slow lane behind me, with an aggressive attitude. I notice their vehicles roll slightly from side to side from the sharp steering maneuver to cut in and out of the lanes at Nascar speeds. “How rude of them,” I think to myself. With a quick glance from the passing lane they think they know where the Red Ranger and I stand in the world. I take her daily doses of humility to heart.

I’m going to genuinely miss driving her when Sophie goes back to college at the end of the month. I didn’t expect the driving experience to be so fun. Her energy was more zoom zoom then chitty chitty bang bang. She’s slowed me down and sharpened an awareness with my surroundings. Every shift in our lives, up or down, is impeccably timed to slow us down or speed us up. On the winding road of life freewill may be doing the steering but a higher power is working the clutch and stick shift. Getting us where we need to be. When we need to be there. We are all vehicles of Spirit. 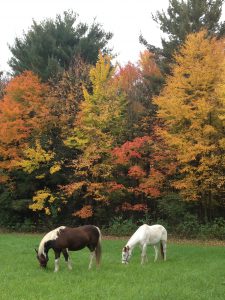 In the circle of seasons fall is a restless spirit. These deep months of autumn are one last raucous hurrah before the weather turns the somber corner towards winter’s reverent quiet. Radiant wild leaves that moments earlier burned the sky’s blue, float like embers from a forest aflame. The confetti-colored earth is a sign that winter’s wait is ending. Summer’s party is over.

Chilly north winds usher in a steady stream of grey clouds heavy with rain. For days the dampness soaks deep down into the bones of the land.  An earthy scent lingers in the air like the perfumed smoke of incense. There is nothing like that smell to freshen ones state of mind. All it washes over is cleansed and purified for the coming journey inward to connect with self.

Seasonal transitions can be unsettling. They are raw elemental movement measurable in the mindfulness I keep on my mood. Nature is forcing us to face our feelings. In my way of thinking, her influence on our mind isn’t to bring our spirits down as much as it is for us to find ways to raise them up.

Each fall is unique. This year the rain has been persistent and significant. For the most part I’ve been able to keep a sunny disposition despite the seemingly endless string of gloomy grey days. Making monstrous kettles of homemade soup is a delicious way to shine a soul or two… or ten.

This fall taught me…

When you can’t hold the heaviness of dark clouds any longer let go of the rain. 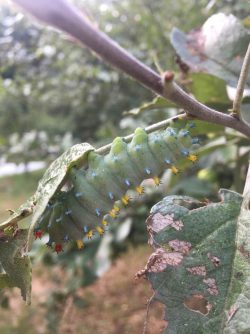 I wasn’t sure if the cheeks facing me were on the smile end or the seat end of this caterpillar but it didn’t matter. Either way, she made me crack a smile. What a delight to see this amazing cecropia moth (Hyalophora cecropia) caterpillar in our apple orchard on this dewy fresh morning. She was nearly as big as my thumb!

With a wingspan of 5-6 inches, the cecropia moth is the largest North American moth. All winter will be spent in a 4-5 inch cocoon. In late May, the cercropia moths emerge from their cocoons. The female only lives about two weeks, just long enough to mate and lay eggs.

Because their skin doesn’t grow the cercropia caterpillar goes through several molting phases, each time attaching itself to a silken pad it has spun. When the new skin is fully developed it will literally walk out of its old skin. This cercropia caterpillar is in the fifth instar larvae stage.

If you have the good fortune to see an adult cercropia moth, I promise you will not be disappointed. Their spectacular color and size is something you will not soon forget. The cercropia moth is another example of nature’s marvelous metamorphosis; ever thing in sacred motion.

Moth medicine is that of inner knowing, determination, vulnerability and movement. I wish her well on her magnificent journey of transformation and hope we meet again in the May night, both of us with our wings. 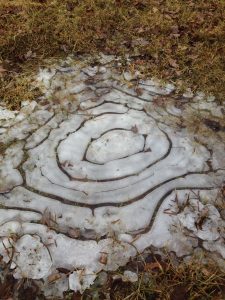 Here in Northeast Wisconsin, warmer weather is arriving painfully slow. Spring makes an appearance then disappears, taking her green magic with her. This time of year we experience what I call Old Man Winter’s dark white. The extended transition time weighs heavy on the spirit of many folks. As each dark white day passes, the anticipation of spring  grows green in our hearts. We know spring will come but we worry about how long it’s taking to get here. It’s precisely this “knowing” that stirs up the crazy in people.

I watched a pair of robin’s, hopping through the snow, stopping occasionally on a grassy patch to cock their heads sideways and listen for worms. Later, they were bouncing through the branches of our crab apple tree gobbling down shriveled up fruit from last season. They don’t “know” when or where their next meal will come from, yet they survive on the unknown, living life in complete acceptance of what is.

Weather, a master at teaching non-judgment and surrender, gives us daily lessons on how to release control and follow the flow. The robin’s made it look easy. Following the flow is all about the awareness of whether you are flailing or floating through this fleeting moment.  To arrive at this place of complete surrender, give up the narrow mindedness of knowing and widen your mindfulness of the unknown—explore the great unknowns.

“It ain’t what you don’t know that gets you into trouble. It’s what you know for sure that just ain’t so.”~ Mark Twain

Wind’s gift to us is movement. On days like today with sustained wind speeds between 20- 30mph and gusts of 50mph, its will to remain in motion is taking with it all that isn’t held down or onto. Its willpower is blowing wild and free over the open land. Add to that a 20-degree temperature and the attitudes of folks drop swiftly into negative territory on their gusts of disgust. They fret and fuss over the slightest exposure to the wind’s elemental power to create sacred motion.

Nature adapts and flows with the windy weather. Birds are staying perched in the cover of Spruce trees and my horses are assuming the sturdy, butt to the wind, position. I like the raw edge of a strong wind. It commands a keen awareness of body and mind. We don’t pay much attention to air until we feel it like when our breath is restricted by a cold or illness. Wind’s Spirit forces us to feel what goes unseen and unnoticed. The air is showing itself today and people are taking notice.

Our movement too can be blustery, messing up our tidy plans. Forced action like a wild wind can tangle, tatter and tear. Sometimes there’s no stopping where we are going. We have to let the Spirit of the wind carry us—surrender—to freedom’s rough and tumble ride. If we can do that we are carried to our destination.

To make it through the next wind advisory, hold onto your hat and your heart. Wait-a-day or two, the winds of change will change, everything in sacred motion, even the wind.

© Angeline Haen and Sweet Wisdoms, 2017-2022. Unauthorized use and/or duplication of this material without express and written permission from this site’s author and/or owner is strictly prohibited. Excerpts and links may be used, provided that full and clear credit is given to Angeline Haen and Sweet Wisdoms with appropriate and specific direction to the original content.